The Importance of a Songbird: a review for Cerulean Blues

Katie Fallon’s first book, Cerulean Blues: a Personal Search for a Vanishing Songbird, tells of her journey to trace the path of the cerulean warbler from the Appalachian Mountains to the Andes Mountains in Colombia. She recounts beautifully the emotional and physical dangers as well as countless moments of joy and despair as she embarked on a personal exploration into the life of the cerulean warbler.

Katie Fallon is a wonderful storyteller, nailing all the details in every memory that add to the flavor but also the relevance of each account. Images are skillfully placed where they make the biggest impact, yet they are subtle and act to draw the reader into the story. Also, the imagery is deeply rooted and flawlessly moves ideas from one place to another.

Even though much of the book is devoted to facts, just the right amount of thought and memory finds its way in. And the best part about this is that it’s so subtle; the facts are perfectly woven in and out of reflection and vice versa, that is, without truly visible or bumpy seams that might disrupt the reader. Also, the book is conversational and allows the reader to have an input while it skillfully steers and guides through a thicket of ideas and memories. There are no pretentious sentences full of jargon and conceited intelligence. Cerulean Blues gets straight to the point.

The book does however contain many digressions, but they are deeply connected to the overall story and idea. For instance, in chapter five, Katie Fallon begins talking about a particular county in West Virginia that she is driving through on her way to meet researchers. She briefly talks about the man that the town has been named after, and how he was active and concerned about the forest, even in his time period (pg. 49). At first, this discussion seems irrelevant and perhaps it is not directly related to the larger story she is telling at that point, but just a few sentences into the digression, she begins to relate his story to her own concepts about the environment. And at the end of the digression, she smoothly loops the detour back to the larger story by telling the reader that these were the thoughts she had while driving to meet the researchers. Also, readers get an opportunity to see the processes of Fallon’s mind at work, how they move from place to place and connect one thought to another.

A large part of what makes Cerulean Blues so great is that Katie Fallon is not afraid to tell on herself. She openly admits her shortcomings and questions her actions often. However, this seems intentional though clearly honest and sincere. She is not overly self-deprecating; rather, she includes her own limitations so that she can make much larger points and ask much larger questions about humanity. And the most brilliant part of this is that she is able to do it so successfully. Her imperfections don’t seem too cumbersome, but they provide plenty of grounds for her to present ideas about society and our current civilization.

In the seventh chapter, “Ceruleomorphizing,” Fallon makes one of her most profound claims. She writes:

“It isn’t difficult to see the fragile links between species. What if, for some
reason, the number of black gum trees began to decline? That could mean
less food for game birds, less food for humans, less paper for our books,
and fewer nest site choices for songbirds” (pg. 74).

Katie Fallon, with a scientific perception and insightful demeanor, shows how a tiny, little songbird is important in the grand scheme of the world. She proves that even this small creature deserves the right to survival because, if not for a plethora of other reasons, its existence is important even to the existence of mankind. And in the book, every creature matters because each one is dependent or related in some way to another. But to Katie Fallon, the cerulean warbler is one of the most beautiful and amazing of them all. 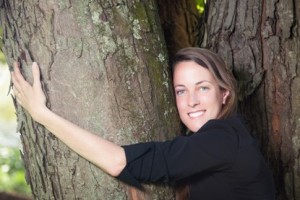 Katie Fallon is the author of the nonfiction book Cerulean Blues: A Personal Search for a Vanishing Songbird. The book, published by Ruka Press, was released on October 18, 2011. Katie’s essays have appeared in a variety of literary journals and magazines, including The Bark, Fourth Genre, River Teeth, Ecotone, Appalachian Heritage, Now & Then, Isotope, and elsewhere. The editors of Fourth River nominated her for a Pushcart Prize for her essay “Lost.” Currently, Katie teaches creative writing at West Virginia University; from 2004-2011 she taught at Virginia Tech in Blacksburg, VA.

Ben Sneyd is a student at Tusculum College and an assistant editor at TTR.