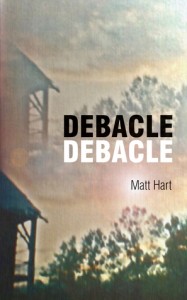 Matt Hart’s latest poetry collection, Debacle Debacle, hinges upon the duality of, well, everything. Reading this book is something akin to stepping into the funhouse mirror room at the county fair. Everywhere you look there are reflections of you, possibly others, reflections of the world outside the mirrors, and reflections of reflections themselves. This book, like those mirrors, takes the ordinary and reconfigures it in a way both alien and comfortable. Like a funhouse, by the time you step out of Hart’s book, you’re inevitably a little dizzy but charged up and grounded at the same time.

A single word repeated twice, the title of the book serves to represent this duality of existence. The title was assigned to the collection after Hart looked up the definition of “debacle” and interpreted the word to have two meanings: “fuck-up” and “flood.” Thus, the book is split into two debacles, one for each meaning of the word.

This collection is unlike Hart’s other works in that it begs for quietness. It is at once reflective and accusing, personal and political. Adam Fell’s blurb on the back jacket declares this book “really loves the world, and hates it too.” During the creation of many of these poems, Hart was confined to his house with a broken foot. Unable to participate in his on-the-go lifestyle, he often found himself isolated to the couch. That’s where this book’s contemplativeness and reflection come from. The poems in Debacle Debacle stretch out from the couch. They walk out the door and play in the yard with the dog or Hart’s daughter, they jump in leaves and shake the hands of strangers. Then, they look back through the window, to Hart on his couch, and they are angry and sad and longing.

The first section of the book consists of poems representative of the “fuck-up.” The initial poem, entitled “Dear Hell,” contains the lines:

When the curtain’s jaw drops, it crushes the house
but also the donkey on fire beside me. Why is it
everybody’s on fire beside me, and why inside me
is the mine always empty, or flooded
with white so I can’t see a thing? I’m sorry
to the wizard for stealing his familiar,
but also to my family for holding a grudge.

This poem does a few things. First, it introduces us a bit to this grudge that the speaker holds (assumedly because he’s pent up in the house). Secondly, it proffers up an apology and hints to healing, of sorts. This poem also serves as both an introduction to the style of the book and as an invitation inside. In its final lines, Hart writes, “I’m the same as ever. You promised to see me soon, / and I took you at your word.” This poem also sets the pace of the section and reaffirms the Andre Breton epigraph at the beginning of the book that reads: “A poem must be a debacle of the intellect.”

In the second section of the book, the atmosphere lightens. A flood of hopefulness washes the dirt and despair clean off the pages, and we’re left with a stark view of Hart’s domestic life. We see him as a father and a peripheral. This section feels as if we’re always with Hart on the cusp of enlightenment, right there in the shadowy place of self-doubt and self-worth, where we’re looking at the world and our place in it. In comparison to the previous section, it strangely asks us to evaluate ourselves and our world as constant dualities or multiplicities, or any word you want to use that means we are of many minds and many things at once. And that’s okay. Debacle Debacle seems to suggest we couldn’t be anything else. 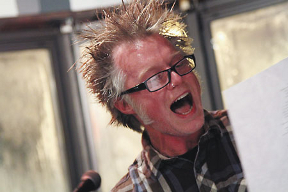 Matt Hart is the author of Who’s Who Vivid (Slope Editions, 2006), Wolf Face (H_NGM_N BKS, 2010), Light-Headed (BlazeVOX, 2011), and Sermons and Lectures Both Blank and Relentless (Typecast Publishing, 2012). A co-founder and the editor-in-chief of Forklift, Ohio: A Journal of Poetry, Cooking, & Light Industrial Safety, he lives in Cincinnati where he teaches at the Art Academy of Cincinnati and plays in the band Travel. 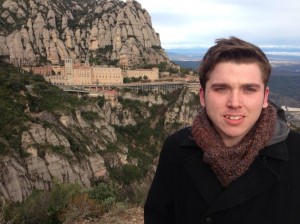 Joseph W. Borden is a senior creative writing student at Tusculum College. He’s an Assistant Editor of The Tusculum Review.