A Review of Lucifer at the Starlite

Kim Addonizio’s latest collection of poetry, Lucifer at the Starlite, gives readers a unique look into a world filled with passion, hope, and sorrow. It begins with the appropriately titled poem, “Sign Your Name,” and takes readers on a lust-coated, cigarette stained walk through the mind of the narrator, as she squares off with her own demanding demons. In fact, there is an obvious and widely distributed allusion to the Devil that saturates her work in this collection. Various poems referencing Dante’s inferno, Catholic mythology, mankind’s demons, and an “AWOL Higher Power” add to this pervasive allusion. While on the ascending road of the collection, Addonizio’s poems cover a wide variety of topics, such as self-reflection and the conquering of one’s lesser-loved qualities. There are poems about depression, suicide, loveless sex, apathy, and the destructive power of individuals. Addonizio pulls no punches as she tackles her devils in a head-on collision of wit and will. Poems such as “There Seems No Way to Get At It” and “In the Lonely Universe” are prime examples of the author’s excellent self-understanding and inner conflict. Nevertheless, the poet does not restrict herself to a single topic, and has a number of poems about occurrences in the physical world. “Another Day on Earth” is a somber and bitter poem about the 2004 Tsunami that damaged large chunks of Asia and left thousands dead or homeless. “Book Burning,” another astringent poem, illustrates the situational irony that arises when a group of religious extremists decides to burn harmful reading material.

No matter the topic, though, Kim Addonizio is always refreshingly honest with the world and with herself. She has no problem capturing feelings of disgust and anger when needed, but can give love, hope, and joy a fair share when they are unexpectedly felt. Interestingly the book takes a turn for the hopeful as it goes on, and ends with two poems of hope. The first is “News,” a poem depicting the small victories over depression and apathy in the narrator’s life. She mentions how “little victories / over a sullen god” who believes “there’s no reason to go on” are what make the days worth leaving the bed. Furthermore, the second poem of hope is titled “Happiness After Grief,” which explores that sudden surge of happiness people sometimes feel for no discernible reason. The narrator of the piece mentions that such a happiness “feels like such a betrayal,” because people assume that happiness should “be the result of some grand event.” Nonetheless, the narrator admits that she is indeed happy, and that it stems from something so seemingly trivial as her neighbor running around without pants. On the whole, this collection is great. Kim Addonizio demonstrates a command of language and feeling that cause readers’ eyes to remain trained to her words. Lucifer at the Starlite is a well-crafted page turner, and I highly recommend it to anyone interested in serious poetry. If the Devil is in the details, as that old saying goes, then Addonizio has uncovered all the best parts of him. 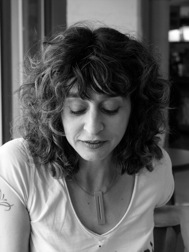 Kim Addonizio has been called “one of our nation’s most provocative and edgy poets.” Her latest books are Lucifer at the Starlite, a finalist for the Poets Prize and the Northern CA Book Award; and Ordinary Genius: A Guide for the Poet Within, both from W.W. Norton.  Her novel-in-verse, Jimmy & Rita, was recently reissued by Stephen F. Austin State University Press. Kalima Press published her Selected Poems in Arabic. Addonizio’s many honors include a Guggenheim Fellowship, two NEA Fellowships, and Pushcart Prizes for both poetry and the essay. Her collection Tell Me was a National Book Award Finalist. Other books include two novels from Simon & Schuster, Little Beauties and My Dreams Out in the Street. Addonizio offers private workshops in Oakland, CA, and online, and often incorporates her love of blues harmonica into her readings.

Kenneth Hill is a graduate student at the University of Tennessee in Knoxville. He loves his family, writing, and reading.